The Voice in My Head 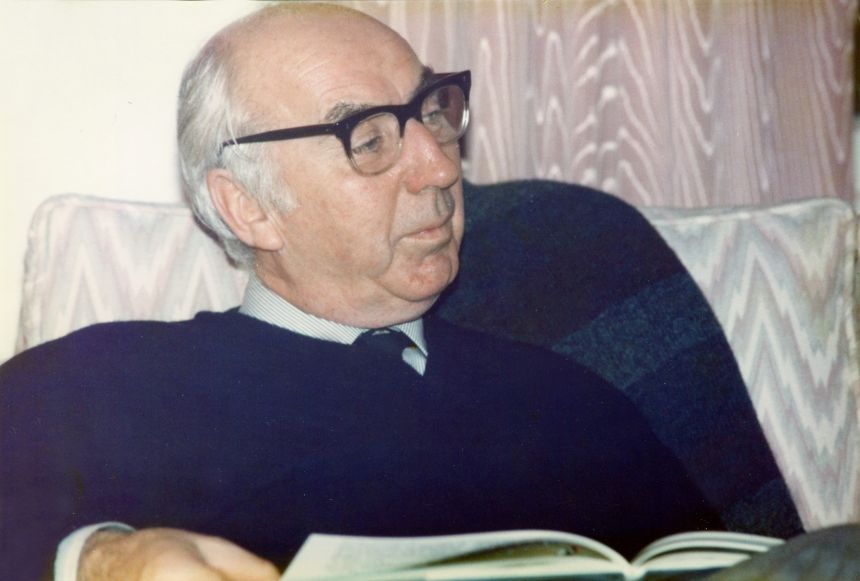 We shared DNA and so much more but perhaps the glue was our humour. Glasgow, born and bred, sarcasm came naturally and he teased me from the minute I was born!  For that I am eternally grateful, learning from a master the genius of making light of situations requiring of calm and perspective. He gave me my strength.

He drove us to school, helped me with my homework, bought my precious records, walked the dogs with me, made me laugh and reassured me that everything was going to be alright, regardless … He collected me from university, bemoaning some of my failures but always there to pick me up – or give me away as he did on my wedding day with the words, ‘It’s not too late to back out, Trish!’. We shared my first glimpse of Africa together and so much more. The past was important to him, as it is to me, and I smile as I remember the many mixed tapes I made him for his car so that he could enjoy the songs we both loved. Those of The Seekers held a special place and the memory of going to see Judith Durham together is particularly poignant – tears tripping us as she sang The Carnival is Over …

The carnival is well and truly over but I carry him with me in my heart and his voice is ever present in my head; his humour and his little sayings forever a source of comfort and strength …

This page is everything Pop!

‘It’ll all fall into place.’

My favourite. Who doesn’t want to hear that?!

‘There’s a plan for every man.’

Yes, but what did I do to deserve this one?!

We sure do but sometime it’s harder than it seems …

Comforting advice when faced with an exam. Note the confidence in his child’s ability! Similarly …

‘Thank God her favourite film wasn’t ‘Scott of the Antarctic’!’

He dined out on that one.

‘The highlight of my day is phoning you – that’s how bad it is!’

Sometimes the simplest things turn out to be the most precious … Packing up my life a few months ago, I came across my old wedding file – sound like Miss Havisham – and a discoloured piece of paper fell from it. Torn on the bottom corner, the size may denote its age but the old typeface looks positively archaic! It was 1984, many long years ago, when Pop took responsibility for getting everybody to the church on time courtesy of his unique directions. Tucked into each invitation, I had forgotten this insert even existed – not one remaining. Like a white feather, however, this lone piece of paper materialised without warning, Pop written all over it!

I never fail to smile when I look at his heading: MASSON v SHERRET. Sadly prophetic, in hindsight, the battle lines were to be truly drawn twenty-eight years later. I laugh, too, as I hear his voice in my head suggesting we should have Fight The Good Fight as one of our hymns … That was him; that was his humour and I miss it. His characteristic sarcasm leaps from the yellowed page and I can almost see him sitting there, in the dining room (don’t ask), struggling to type his introduction, laughing out loud at every word. I intend to upload a photo of the original but, in the absence of a magnifying glass or x-ray vision, perhaps easier to read the following:

Just a snippet of the father of the bride’s directions to his daughter’s wedding. You can imagine the speech! Wish I had a video or even his notes. Suffice to say, it was absolutely perfect. He teased me from birth until the day he died and, for that, I shall be eternally grateful. His words, now, on that torn, discoloured piece of paper could not be more precious … 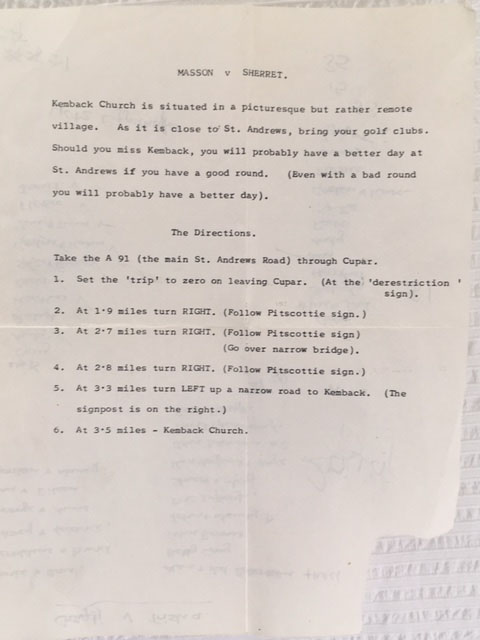 Pop was synonymous with sarcasm and laughter.  He loved nothing more than to recount his favourite anecdotes or jokes.  It mattered little whether or not they were funny because his own laughter was infectious.  An audience was almost inconsequential!  How I miss that; him.

Latterly, stuck in that horrendous home, he reminisced a lot and pulled little gems from his memory.  I had no idea that the following was his favourite joke – never heard it in all my years – but here it is …

Builders are renovating this old house in Dublin – obviously, uninhabited for some time – when they come across a hidden cupboard.  On opening the door, they are met with a skeleton!  Round his neck, on a ribbon, is a medal which reads: Irish Hide & Seek Champion 1958!

‘A legacy secure, he lives on in those he loved and who loved him back.  Perhaps fitting that I end with one of the last jokes he told me – you had to hear him tell it!

Picasso’s house is broken into and the police are called. Enquiring as to whether Picasso saw the burglar, they suggest he produce a drawing of the suspect.
The following day, the police arrest a horse with a can of sardines!

I, actually, didn’t get it immediately but he laughed and laughed.  God speed, Pop …’

Beneath, I wrote the title of one of my friend, Tom’s (Odell, that is), beautiful songs, Half As Good As You – my favourite.  We went to see Tom, in concert, two days later, tears tripping me as he sang the lyric, ‘If I ever find anyone half as good as you, think maybe that will do …’.

As I write, the mother of one of my dearest childhood friends passed away, peacefully, last night.  A poignant time and one of reflection.  Brings it all back.  The loss of the second parent pulls one up fast; a stark reminder of one’s own mortality – and the ties that bind.  Strangely, too, I am reading a book, at the moment, by my favourite author, Alexandra Fuller.  Called Travel Light, Move Fast, it is about the death of her beloved father and, as with so much of her writing, touches my soul.  I have just copied some of her words into my book of quotes of which the following probably resonates the most …

‘He was gone, and a time had gone with him, and my way of knowing how to be in all time; that too had vanished.
So this is grief, I’d thought.
It’s the theft of time, all time for all of time.’

See what I mean!

Last Sunday, I finally opened the old blanket box which used to sit by the window in my bedroom in Lyndhurst.  I, carefully, lifted out the old cuckoo clock (brought back from St Wolfgang) – still in storage wrapping – synonymous with the stair leading up to the Maid’s Room.  Pop used to pull the weight and wind it up every night as he went upstairs to his ‘dressing room’, en route to change into his jammies, before coming down for his supper of ‘flakes’!

I lined the blanket box with an old roll of wallpaper and then pulled the bag from the shelf in my cupboard filled with precious cards, letters, photos and so many memories.  Cards wishing me luck in my driving test, my 21st Birthday cards, the programme for ‘They’re Playing Our Song’ which we saw on the night of my actual Birthday at the Shaftesbury Theatre in London and even the empty bottle of champagne we had in the interval!  Relics, now …

Then, I found the unexpected – a letter from Pop!  Throughout my life, I thought he had only sent me one; little more than a note, really, at the end of uni, with which he included a £5 note to go out for celebratory drinks!  Water, then?  No, just a long, long time ago.

I had completely forgotten about this one but, of course, I had kept it!  The headed notepaper, his distinctive handwriting – completely illegible – and that unmistakable humour, as ever, directed at me!  As I read his words, I can still hear his voice; The Voice in My Head.
Always.

Please don’t collapse when you realise your aged father is, at last, writing to you.  Since you started at Edinburgh last October, almost every week I have resolved to write to you, and now with only a day to the end of your term, the big day has come.

At the moment, I’m about to start an Out-patient Clinic in the Victoria, and no doubt I’ll be seeing lots of suicidal people who were watching the World Cup last night.  Even Mummy watched the pathetic performance – I hope you were too busy doing a whole year’s work in one night to get involved with TV.

It must be a pleasant thought for you to be a lady of leisure now.  If you had not been involved at the Woollen Mill in St Andrews, I could have organised a job for you at Stratheden as a receptionist in the medical offices.  It is, in fact, a non-job which I am sure you could do rather well.  You sit all day at a reception desk looking like a cow gazing over a dyke – when the job became vacant, I immediately thought of you.  Seriously, Trish, I am sure you would find it too dull, and you would prefer the bustle and activity of the Woollen Mill.  However, if you want to know anything about it, let me know.

No doubt, Mummy will be telling you about hearing from her friend, Fiona, who, on the 17th, is having a party and she has invited Mummy and I through for it.  This time, I’m going to make sure I get to a bed before the night is out.  I still haven’t recovered from that performance at Eaglesham.  We have nothing much else to tell you of our hectic social life.  On Sunday, I’ll be at Barry playing golf for a team of Fife Doctors v Dundee, so it will probably be pouring.  What about coming to caddy for me?

I now hear rumblings in the Waiting Room outside, so I will now depart.  If you have had difficulty in reading this, try turning the pages upside down.

Tarquin joins me in sending his love. 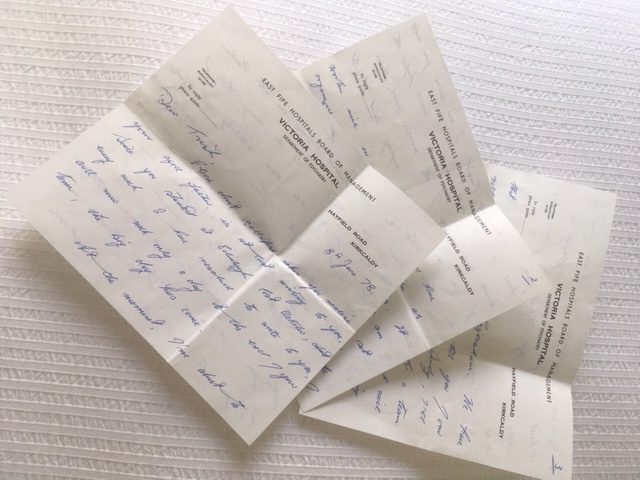 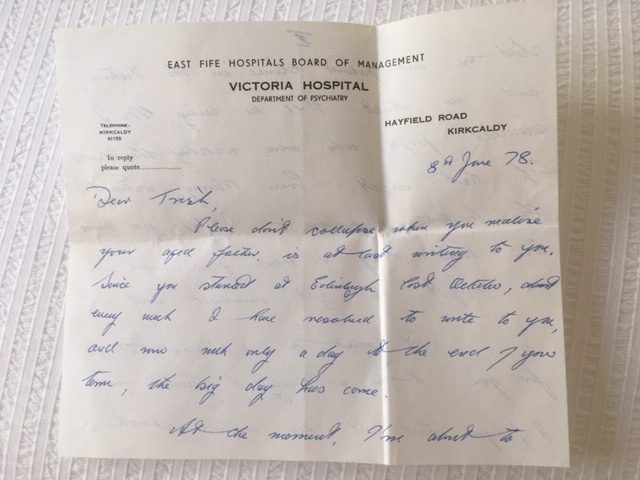 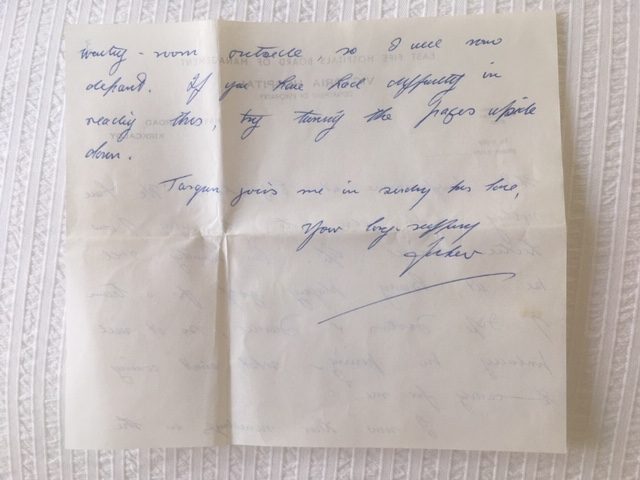